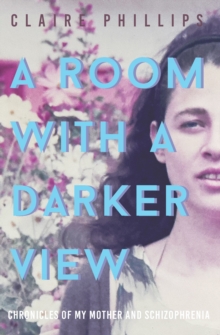 A Room with a Darker View : Chronicles of My Mother and Schizophrenia Paperback / softback

A daughter breaks the family silence about her mother's schizophrenia, reframing hospitalizations, paranoia, illness, and caregiving through a feminist lens. "I am going blind. I am going blind," my mother would proclaim whenever I would call her in the psychiatric hospital, from almost three thousand miles away in Los Angeles. "By tomorrow," my mother would shout into the phone, "I will be blind."For years she had coped on her own until her doctor reduced her Haldol in hopes of decreasing harmful neurological side effects.

The results were cataclysmic. This would be one of many relapses after receiving a diagnosis for paranoid schizophrenia in her mid-forties, after a ten-year prolonged psychosis during which my mother worked as criminal public defense counsel on behalf of some of New York and New Jersey's most disadvantaged residents. A Room with a Darker View is an unflinching, feminist work that chronicles the author's troubled relationship with her mother, an Oxford-trained lawyer, whose severe illness - marked by manic bouts of laughter, delusions, and florid hallucinations - went unrecognized for decades. Told in fragments, flashbacks, and chronicling the most extreme but unfortunately common aspects of schizophrenia, this elegantly written memoir is a reflection on illness, shame, and the generation gaps that have defined mother-daughter relationships amid the evolution of feminism in the 20th century.

Like Anne Boyer's lauded memoir, The Undying, A Room with a Darker View is not a linear tale of redemption or restitution.

My family's inability to accommodate my mother's illness, the perniciousness of her particular subtype of schizophrenia, paranoia, and the story of women's fight for gender equality in both the workplace and at home are part of this chronicle. In 500-word vignettes A Room with a Darker View retrospectively examines the trauma of undiagnosed mental illness besieging a mother-daughter relationship.

Of particular note, the author documents her mother's determination in trying to find a place for herself in the male dominated field of law in the 1970s, and her equal determination to recover some semblance of a life after a difficult diagnosis, as she becomes heavily medicated and impoverished by divorce.

Only with her mother's final relapse at 73 did the author begin to tell this story, first in Black Clock, an essay for which she received a Pushcart nomination and notable mention in The Best American Essays 2015.