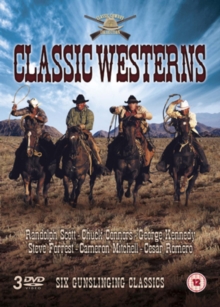 Collection of six western films. In 'The Hanged Man' (1974) James Devlin (Steve Forrest) is hanged for his crimes but somehow survives and wakes up while on the undertaker's table.

He decides to use this second chance at life to make up for his past behaviour.

When he discovers that a widow (Barbara Luna) and her young son are being pressured into selling their land by shady businessman Lew Halleck (Cameron Mitchell), Devlin decides to intervene.

To make amends, he decides to escort the funeral procession through potentially dangerous Indian territory.

In 'The Gunfighters' (1987) the Everett family ranch is under threat by unscrupulous landowner Deke Turner (George Kennedy) and, after an altercation, Matt Everett (Anthony Abbaddo) is forced to kill one of Turner's men in self-defence.

Turner then has him arrested for murder. With Matt in jail, his older brothers, Cole (Art Hindle) and Dutch (Reiner Schoene), decide to make a rescue attempt.

In 'The Proud and Damned' (1972) three Confederate veterans (Chuck Connors, Aron Kincaid and Cesar Romero) are hired by General Martinez (Andreas Marquis) to infiltrate a South American town he wants to take control of.

On their arrival, however, the men find that the town of San Carlo is a peaceful place where they are embraced by the locals.

They then decide to switch their allegiance and fight against General Martinez in support of the town.

In 'Rage at Dawn' (1955) special agent James Barlow (Randolph Scott) is hot on the trail of murderous criminals the Reno brothers, and realises he must break the law to capture them.

He attempts to use a train robbery as an opporunity to apprehend the outlaws, but not everything goes according to plan.

In 'High Lonesome' (1950) a family on an isolated cattle ranch is unsettled by the mysterious appearance on the ranch of a teenage drifter (John Drew Barrymore).

The mystery deepens as the locals connect him with two men thought to have died 15 years previously. 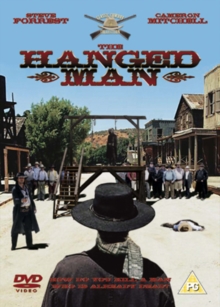