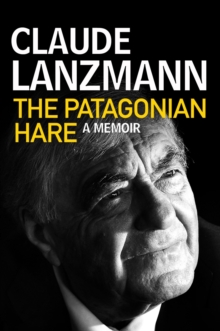 The Patagonian Hare : A Memoir Hardback

a cry of witness to the 20th century - the unforgettable memoir of 70 years of contemporary and personal history from the great French filmmaker, journalist and intellectual Claude Lanzmann. 'The guillotine - and capital punishment and other diverse methods of dispensing death more generally - have been the abiding obsessions of my life.

It began very early. I must have been no more than ten years old...' Born to a Jewish family in Paris, 1925, Lanzmann's first encounter with radicalism was as part of the Resistance during the Nazi occupation.

He and his father were soldiers of the underground until the end of the war, smuggling arms and making raids on the German army.

After the liberation of France, he studied philosophy at the Sorbonne, making money as a student in surprising ways (by dressing as a priest and collecting donations, and stealing philosophy books from bookshops).

It was in Paris however, that he met Jean-Paul Sartre and Simone de Beauvoir.

It was a life-changing meeting. The young man began an affair with the older de Beauvoir that would last for seven years.

He became the editor of Sartre's political-literary journal, Les Temps Modernes - a position which he holds to this day - and came to know the most important literary and philosophical figures of postwar France. And all this before he was thirty years old... Written in precise, rich prose of rare beauty, organized - like human recollection itself - in interconnected fragments that eschew conventional chronology, and describing in detail the making of his seminal film Shoah, The Patagonian Hare becomes a work of art, more significant, more ambitious than mere memoir.

In it, Lanzmann has created a love song to life balanced by the eye of a true auteur.