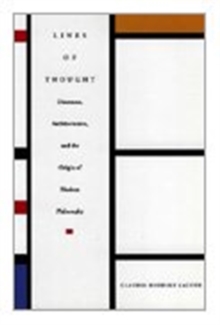 Lines of Thought : Discourse, Architectonics, and the Origin of Modern Philosophy Hardback

It is considerably easier to say that modern philosophy began with Descartes than it is to define the modernity and philosophy to which Descartes gave rise.

In Lines of Thought, Claudia Brodsky Lacour describes the double origin of modern philosophy in Descartes's Discours de la methode and Geometrie, works whose interrelation, she argues, reveals the specific nature of the modern in his thought.

Her study examines the roles of discourse and writing in Cartesian method and intuition, and the significance of graphic architectonic form in the genealogy of modern philosophy. While Cartesianism has long served as a synonym for rationalism, the contents of Descartes's method and cogito have remained infamously resistant to rational analysis.

By returning to what Descartes calls the construction of his "foundation" in the Discours, Brodsky Lacour identifies the conceptual problems at the root of Descartes's literary and aesthetic theory as well as epistemology.

If, for Descartes, linear extension and "I" are the only "things" we can know exist, the Cartesian subject of thought, she shows, derives first from the intersection of discourse and drawing, representation and matter.

The crux of that intersection, Brodsky Lacour concludes, is and must be the cogito, Descartes's theoretical extension of thinking into material being.

Describable in accordance with the Geometrie as a freely constructed line of thought, the cogito, she argues, extends historically to link philosophy with theories of discursive representation and graphic delineation after Descartes.

In conclusion, Brodsky Lacour analyzes such a link in the writings of Claude Perrault, the architectural theorist whose reflections on beauty helped shape the seventeenth-century dispute between "the ancients and the moderns."Part of a growing body of literary and interdisciplinary considerations of philosophical texts, Lines of Thought will appeal to theorists and historians of literature, architecture, art, and philosophy, and those concerned with the origin and identity of the modern. 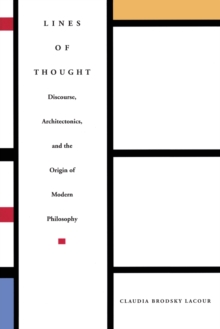