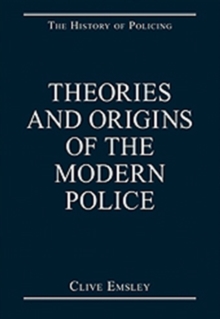 Theories and Origins of the Modern Police Hardback

This volume is the first of four that will provide some of the most significant, English-language articles on the historical development of the police institution.

The articles included in this volume are broadly of two kinds. The first introduce some of the theoretical outlines that have been suggested for the origins and development of modern police institutions across Europe. The second explore the systems of enforcement, and the criticisms of them, that had emerged on the eve of the revolutionary upheavals which convulsed Europe and inflicted a terminal blow to the ancien regime at the close of the eighteenth century.