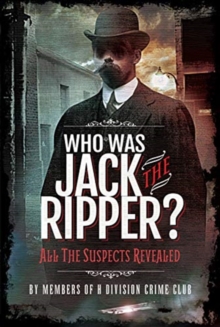 Who was Jack the Ripper? : All the Suspects Revealed Hardback

Jack the Ripper is the ultimate cold case. The Whitechapel Murders of 1888 have remained unsolved for over 130 years and hundreds of theories have been suggested as to the killer's identity. Despite numerous books claiming to unmask the infamous Victorian villian.

None have come close . until now. The authors of this book are all members of H Division Crime Club, the world's largest body of experts on the Jack the Ripper murders. They have all come together for the first time in history to deliver their own personal research into each suspect and to finally nail down the identity of the man know as Jack the Ripper. Taking the original police reports, eye witness accounts and research by the worlds leading authorities, we ask two crucial questions. Who did the police suspect at the time ?Who was in the area to commit the murders ?Using 21st century profiling techniques, it's time to reveal the truth behind the men most likely to have been Jack the Ripper. With each chapter discussing a separate suspect in detail, this book is the ultimate guide to solving the world's greatest murder mystery.