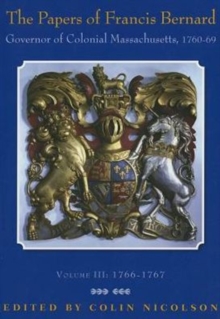 As governor of colonial Massachusetts between 1760 and 1769, Francis Bernard was charged with shoring up British imperialism during the first period of sustained American opposition to the authority of the King-in-Parliament.

The documentary record of the middle years (1766 and 1767) of Bernard's troubled administration reveals a governor at odds with his American charges and discomfited by the knowledge that his British masters did not appreciate his predicament. As a commentator on the Stamp Act Crisis of 1765-66, Governor Bernard was a candid and self-effacing narrator with a penchant for revelation and a talent for dramatisation.

Bernard's correspondence of 1766 and 1767 illuminates two major causes of the Revolution.

The writings demonstrate why British policymakers were prepared to take a firmer line with the Americans and send British Regulars to Boston in 1768, and why many Americans convinced themselves that the British government was predisposed to ignore their aspirations and grievances.

The Papers of Francis Bernard provide historians with enlightening details as well as hard evidence of how British imperialism was negotiable in the decade before the War of Independence.

Distributed for the Colonial Society of Massachusetts.