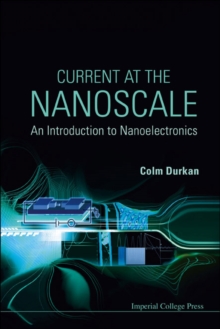 Current At The Nanoscale: An Introduction To Nanoelectronics Hardback

This introductory text deals with how electric currents behave at the nanometer scale.

The book ties together several aspects of recent research on current flow at the nanoscale, including its relevance in defects, grain boundaries, tunneling, and atomic contacts; its effects through nanostructures, particularly for transistor miniaturization; and the techniques used to probe currents and voltages at the nanoscale, focusing on scanning probe microscopy and transport measurements.

It covers topics such as quantum transport, mesoscopic physics, and molecular electronics, among others.Unlike other books on this subject that are almost entirely theoretical, the introductory nature of this book strikes a balance between theory and experiment.

Moreover, given the introductory nature of the book, it will not become obsolete quickly and chapters can be added at later stages as new developments inevitably arise.

Based largely on MEng and MPhil courses that have been originated and taught by the author, as well as on his own research, the book is written primarily for postgraduate students, but contains elements that undergraduates can also understand and apply.

The wide coverage of topics allows for a broad readership base, and serves as a good starting point for those who wish to do work on nanoscale transport.