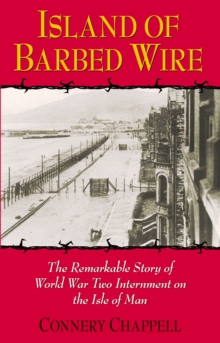 Island of Barbed Wire : The Remarkable Story of World War Two Internment on the Isle of Man Paperback / softback

At the start of the Second World War there were estimated to be 75,000 'enemy aliens' living in Britain, each a potential security risk. To screen these, Enemy Alien Tribunals were set up, with the first tribunal judging only 569 cases serious enough to warrant internment. The Isle of man was chosen as somewhere secure enough to hold them. But when Italy entered the war in 1940, the tribunals' workload grew an, by the end of the year, the number of enemy aliens on the island had risen to 14,000.Who wee these internees? How did they cope with being interned? Did any try to escape? What was daily life like inside the camps? How great a risk did they really pose?With the use of diaries, newspapers and personal testimonies, Island of Barbed Wire looks at the selection, arrival, living conditions and, ultimately, repatriation, of the internees. Their lives and the live of the Manx people they came into contact with would never be the same when this popular holiday isle was transformed into an internment camp for the duration of the war. And even now the question remains - was the policy of internment ever justified?