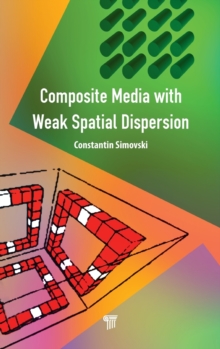 by Constantin (Department of Electronics and Nanoengineering, School of Electrical Engineerin Simovski

WSD manifests in two important phenomena called bianisotropy and artificial magnetism, whose microscopic origin is thoroughly studied in this book.

The theory of this book is applicable to the natural media with WSD, such as chiral materials.

However, emphasis is given to artificial media, too, with the idea to engineer needed electromagnetic properties.

The text describes a homogenization model of effectively continuous media with multipole electromagnetic response, taking into account the interface effects.

Another model is developed for so-called metamaterials in which artificial magnetism can be a resonant phenomenon and may result in the violation of Maxwell's boundary conditions and other challenges.

The book will hopefully improve the understanding of WSD and help readers to correctly describe and characterize metamaterials.