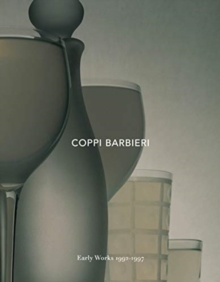 The London based photography duo Lucilla Barbieri and Fabrizio Coppi met in Milan in the early 90s and started to work together as Coppi Barbieri.

In the following decades they have become among the most sought after still life photographers in the world crafting meticulous images for the likes of Apple, Chanel, Cartier, Estee Lauder, Fendi, Gucci, Harry Winston, Louis Vuitton, and Van Cleef & Arpels.

Early Works 1992-1997 presents for the first time the experimental images they created together before their commercial career took off.

Their first experiments involved flowers immersed in water, common household objects such as plastic bottles, and glassware, and back-lit dresses animated by fans.

Their inspiration was the work of historical photographers and artists such as Andre Kertesz, Baron Adolph de Meyer, Josef Sudek and the painter Morandi.

But they also injected the sensibility of fashion photographers working at that time such as Paolo Roversi and Javier Vallhonrat.

Their slow process involved using single 5x7 film which lends the pictures in this book a unique quality and the feeling of belonging to another world.