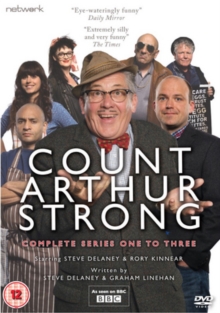 All the episodes from the first to third series of the comedy drama based on the popular BBC Radio 4 sitcom starring Steve Delaney as a befuddled, malapropism-dropping former variety star.

After a life spent resolutely denying his own infallibility, 72-year-old thespian Count Arthur Strong (Delaney), beset by memory loss and delusions of grandeur, is tracked down by his former variety partner's son Michael (Rory Kinnear) who is writing a biography on his late father's life and wishes Arthur to contribute some anecdotes.

But as Michael attempts to gain insight into his father's life from the man who knew him best, he finds himself trapped in the chaotic maelstrom that constitutes Arthur's world.