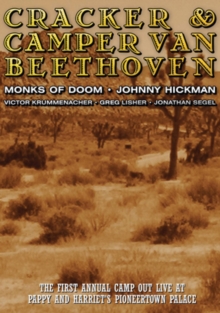 Camper Van Beethoven were formed in 1983 and are renowned for the diverse array of musical styles they incorporated into an overall rock ethic.

When the band split up in 1990 frontman David Lowery went on to form Cracker, an equally popular alternative rock band.

This concert, filmed in 2005, features live sets from both bands as well as supporting acts including Victor Krummernacher, Jonathan Segel, Monks of Doom and Greg Lisher.