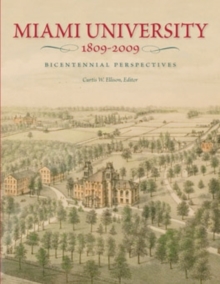 From its start in the nineteenth century as a small midwestern college to its transformation into a twenty-first-century international university, Miami University has stood for two centuries as a model of public higher education.

With hundreds of illustrations and contributions from many hands, Miami University, 1809-2009: Bicentennial Perspectives reviews how national social forces and academic culture interacted in the college town of Oxford, Ohio, yielding five different eras of campus life over two hundred years.

This special bicentennial book celebrating one of Ohio's premier universities considers how Miami leaders responded to moments of conflict, controversy, and change, and how lasting achievements emerged from unexpected challenges.

It suggests that interactions between Miami and Oxford's educational institutions for women played a role in forming the character of the university that eventually absorbed them. Accounts of key turning points in Miami history; biographies of important figures; the emergence of new curricula, professional schools, and campuses beyond Oxford and abroad; and development of a focus on student learning are blended with stories revealing the character of daily life in different eras, the growth of student traditions, the architectural heritage that became Miami University today, and the creation of a distinctive sense of the Miami past.