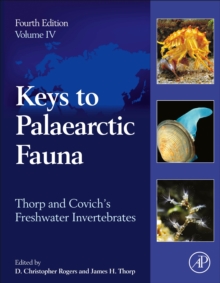 Thorp and Covich's Freshwater Invertebrates: Keys to Palaearctic Fauna, Fourth Edition, is part of a multivolume series covering inland water invertebrates of the world that began with Vol.

It now continues with identification keys for Palearctic invertebrates in Vol.

IV. Two other volumes currently in development focus on general invertebrates of the Neotropical/Antarctic, and Australasian Bioregions.

Other volumes in the early planning stages include Afrotropical and Oriental/Oceanic Bioregions.

All volumes are designed for multiple uses and levels of expertise by professionals in universities, government agencies and private companies, as well as by graduate and undergraduate students.