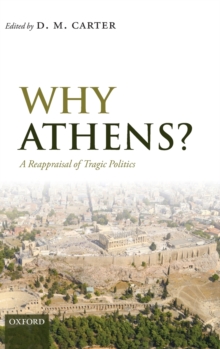 Why Athens? : A Reappraisal of Tragic Politics Hardback

This collection of fourteen essays and six short responses reconsiders Greek tragedy as a reflection of Athenian political culture.

The contributors try to avoid making the controversial assumption that the politics of tragedy were of simple relevance to the Athenian democracy.

Instead, they look for other ways to explain the Athenianness of tragedy.

These include: the polyphonic discourse of tragedy; the presentation of Athens in some plays (and the representationof foreigners too); tragedy as an Athenian form of choral performance; and the ways in which family matters are presented, for example marriage alliances or inheritance law.

Why Athens? opens up important new ways of considering tragedy as a political art form.