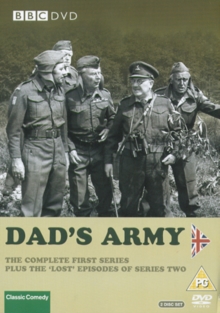 All nine surviving episodes from Series 1 and 2 of Jimmy Perry and David Croft's classic BBC wartime comedy based around the Home Guard in Walmington-on-Sea.

In 'The Man and the Hour', bank manager Captain Mainwaring (Arhtur Lowe) is put in charge of Walmington-on-Sea's new Local Defence Volunteers platoon. 'Museum Piece' sees the men in training with only fifteen carving knives and a shotgun to defend themselves against a Nazi invasion.

In 'Command Decision', Mainwaring is forced to consider resigning as commander in exchange for 20 rifles from Colonel Square.

In 'Enemy Within the Gates', the Walmington-on-Sea Home Guard capture two German airmen, only to have Private Godfrey (Arnold Ridley) let them 'go for a tinkle'.

In 'The Showing Up of Corporal Jones', Jones (Clive Dunn) is forced to undergo a 15-minute gruelling assault course to prove his fitness. 'Shooting Pains' sees the platoon forced to sharpen up their shooting skills in time to impress the visiting PM.

In 'Operation Kilt', the HQ comes under attack from six members of the Highland Regiment.

In 'The Battle of Godfrey's Cottage', two halves of the platoon mistake each other for German troops, and prepare to attack each other.