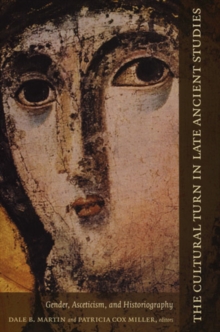 The essays in this provocative collection exemplify the innovations that have characterized the relatively new field of late ancient studies.

Focused on civilizations clustered mainly around the Mediterranean and covering the period between roughly 100 and 700 CE, scholars in this field have brought history and cultural studies to bear on theology and religious studies.

They have adopted the methods of the social sciences and humanities-particularly those of sociology, cultural anthropology, and literary criticism.

By emphasizing cultural and social history and considerations of gender and sexuality, scholars of late antiquity have revealed the late ancient world as far more varied than had previously been imagined.The contributors investigate three key concerns of late ancient studies: gender, asceticism, and historiography.

They consider Macrina's scar, Mary's voice, and the harlot's body as well as Augustine, Jovinian, Gregory of Nazianzus, Julian, and Ephrem the Syrian.

Whether examining how animal bodies figured as a means for understanding human passion and sexuality in the monastic communities of Egypt and Palestine or meditating on the almost modern epistemological crisis faced by Theodoret in attempting to overcome the barriers between the self and the wider world, these essays highlight emerging theoretical and critical developments in the field. Contributors. Daniel Boyarin, David Brakke, Virginia Burrus, Averil Cameron, Susanna Elm, James E.