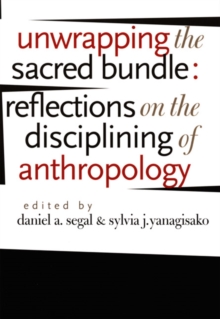 Unwrapping the Sacred Bundle : Reflections on the Disciplining of Anthropology Hardback

Lively, forceful, and impassioned, Unwrapping the Sacred Bundle is a major intervention in debates about the configuration of the discipline of anthropology.

In the essays brought together in this provocative collection, prominent anthropologists consider the effects of and alternatives to the standard definition of the discipline as a "holistic" study of humanity based on the integration of the four fields of archaeology, biological anthropology, sociocultural anthropology, and linguistic anthropology.

Editors Daniel A. Segal and Sylvia J. Yanagisako provide a powerful introduction to the volume.

Unabashed in their criticism of the four-field structure, they argue that North American anthropology is tainted by its roots in nineteenth-century social evolutionary thought.The essayists consider the complex state of anthropology, its relation to other disciplines and the public sphere beyond academia, the significance of the convergence of linguistic and cultural anthropology, and whether or not anthropology is the best home for archaeology.

While the contributors are not in full agreement with one another, they all critique "official" definitions of anthropology as having a fixed, four-field core.

The editors are keenly aware that anthropology is too protean to be remade along the lines of any master plan, and this volume does not offer one.

It does open discussions of anthropology's institutional structure to all possible outcomes, including the refashioning of the discipline as it now exists. Contributors. James Clifford, Ian Hodder, Rena Lederman, Daniel A.