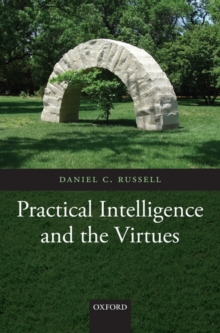 Practical Intelligence and the Virtues Hardback

One of the most important developments in modern moral philosophy is the resurgence of interest in the virtues.

In this new book, Daniel Russell explores two important hopes for such an approach to moral thought: that starting from the virtues should cast light on what makes an action right, and that notions like character, virtue, and vice should yield a plausible picture of human psychology.

Russell argues that the key to each of these hopes is an understanding ofthe cognitive and deliberative skills involved in the virtues.

If right action is defined in terms of acting generously or kindly, then these virtues must involve skills for determining what the kind or generous thing to do would be on a given occasion.

Likewise, Russell argues that understandingvirtuous action as the intelligent pursuit of virtuous goals yields a promising picture of the psychology of virtue.

This book develops an Aristotelian account of the virtue of practical intelligence or 'phronesis'-an excellence of deliberating and making choices-which Russell argues is a necessary part of every virtue.

This book also takes a penetrating look at issues like the unity of the virtues, responsibility for character, and that elusive figure, 'the virtuous person'.

Written in a clear and careful manner, Practical Intelligence and the Virtues will appealto philosophers and students alike in moral philosophy and moral psychology.