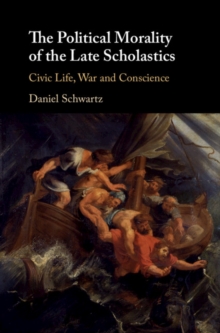 The Political Morality of the Late Scholastics : Civic Life, War and Conscience Hardback

The late scholastics, writing in the Baroque and Early Modern periods, discussed a wide variety of moral questions relating to political life in times of both peace and war.

Is it ever permissible to bribe voters? Can tax evasion be morally justified? What are the moral duties of artists? Is it acceptable to fight in a war one believes to be unjust?

May we surrender innocents to the enemy if it is necessary to save the state?

These questions are no less relevant for philosophers and politicians today than they were for late scholastic thinkers.

By bringing into play the opinions and arguments of numerous authors, many of them little known or entirely forgotten, this book is the first to provide an in-depth treatment of the dynamic and controversial nature of late scholastic applied moral thinking which demonstrates its richness and diversity.