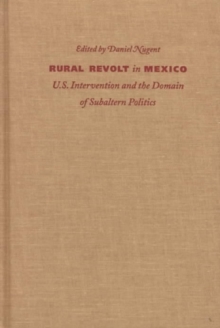 Rural Revolt in Mexico : U.S. Intervention and the Domain of Subaltern Politics Hardback

Rural Revolt in Mexico is a historical investigation of how subaltern political activity engages imperialism, capitalism, and the United States.

In this volume, Daniel Nugent has gathered a group of leading scholars whose work examines the relationship of revolts by peasants and Indians in Mexico to the past century of U.S. intervention-from the rural rebellions of the 1840s through the 1910 revolution to the 1994 uprising in Chiapas.

Through their studies of social movements and popular mobilization in the Mexican countryside, the contributors argue for understanding rural revolts in terms of the specific historical contexts of particular regions and peoples, as well as the broader context of unequal cultural, political, and economic relations between Mexico and the United States.

Exploring the connections between external and internal factors in social movements, these essays reveal the wide range of organized efforts through which peasants and Indians have struggled to shape their own destiny while confronted by the influence of U.S. capital and military might. Originally published as a limited edition in 1988 by the Center for U.

S.-Mexican Studies, this volume presents a pioneering effort by Latin Americanist scholars to sympathetically embrace and enrich work begun in Subaltern Studies between 1982 and 1987 by projecting it onto a different region of historical experience.

This revised and expanded edition includes a new introduction by Daniel Nugent and an extensive essay by Adolfo Gilly on the recent Chiapas uprising.