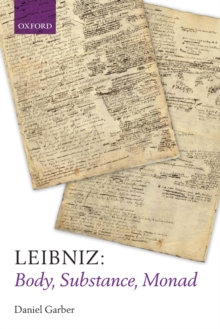 Daniel Garber presents an illuminating study of Leibniz's conception of the physical world.

But Leibniz's apparently idealist metaphysics is very puzzling: how can any sensible person think that the world is made up of tiny minds?

In this book, Garber tries to make Leibniz's thought intelligible by focusing instead on his notion ofbody.

Beginning with Leibniz's earliest writings, he shows how Leibniz starts as a Hobbesian with a robust sense of the physical world, and how, step by step, he advances to the monadological metaphysics of his later years.

Much of the book's focus is on Leibniz's middle years, where the fundamentalconstituents of the world are corporeal substances, unities of matter and form understood on the model of animals.

For Garber monads only enter fairly late in Leibniz's career, and when they enter, he argues, they do not displace bodies but complement them.

In the end, though, Garber argues that Leibniz never works out the relation between the world of monads and the world of bodies to his own satisfaction: at the time of his death, his philosophy is still a work in progress.