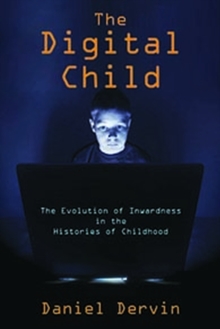 The Digital Child : The Evolution of Inwardness in the Histories of Childhood Hardback

Nothing is more synonymous with the twenty-first century than the image of a child on his or her smart phone, tablet, video game console, television, and/or laptop.

But with all this external stimulation, has childhood development been helped or hindered?Daniel Dervin is concerned that today's childhood has become unmoored from its Rousseauist-Wordsworthian anchors in nature.

He considers childrens development to be inextricably linked with inwardness, a psychological concept referring to the awareness of ones self as derived from the world and the internalization of such reflections.

Inwardness is the enabling space that allows ones thoughts, experiences, and emotions to be processed.

It is an important adaptive marker of human evolution. In The Digital Child, Dervin traces the evolution of how we have perceived childhood in the West, and thus what we have meant by inwardness, from pre-history to today.

This stage has emerged from current unprecedented and pervasive technological culture.

Weaving together approaches from biology, culture, and psychology, Dervin revisits who we once were as a species in order to enable us to grasp who we are becoming, and where we might be heading, for better or worse.