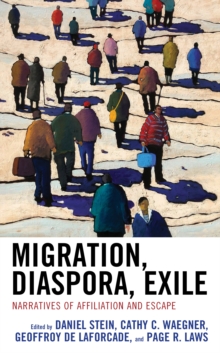 Migration is the most volatile sociopolitical issue of our time, as the current escalation of discourse and action in the United States and Europe concerning walls, border security, refugee camps, and deportations indicates.

The essays by the international and interdisciplinary group of scholars assembled in this volume offer critical filters suggesting that this escalation and its historical precedents do not preclude redemptive counterstrategies.

Encoded in narratives of affiliation and escape, these counterstrategies are variously launched as literary, cinematic, and civic interventions in past and present constructions of diasporic, migratory, or exilic identities.

The essays trace these narratives through the figure of the "exile" as it moves across times, borders, and genres, transmogrifying into the fugitive, the escapee, the refugee, the nomad, the Other.

Arguing that narratives and figures of migration to and in Europe and the Americas share tropes that link migration to kinship, community, refuge, and hegemony, the volume identifies a transhistorical, transcultural, and transnational common ground for experiences of mediated diaspora, migration, and exile at a time when public discourse and policy-making emphasize borders, divisions, and violent confrontations.