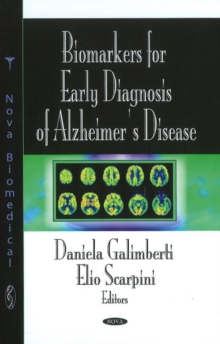 Alzheimer's disease (AD) is characterized by the deposition into the brain of amyloid peptide, which originates a cascade of inflammatory events leading eventually to neuronal death.

These pathological events likely occur several years before the clinical manifestation of the disease, implying that potential therapeutical interventions are currently started too late to give beneficial results.

Recently, growing attention has been paid to the Mild Cognitive Impairment (MCI), considered the prodromal phase of AD, as 80% of subjects with MCI have been shown to develop AD within 5 years.

Several studies aimed to identify biological markers to differentiate between normal aging and incipient AD have been carried out, including cerebrospinal fluid (CSF) analysis and neuroimaging.

In particular, the evaluation of CSF Amyloid beta (1-42) levels, together with tau and phospotau, are of help for recognizing early AD.

Besides, a number of additional molecules are altered in CSF.

Other early modifications have been observed in peripheral cells, such as fibroblasts and leukocytes, as well as in serum from patients.

Moreover, they would be of great help for the selection of cohorts of homogeneous patients for clinical trials with new disease-modifying compounds.

This book is aimed to give an update about MCI as prodromal Alzheimer's disease (AD), to discuss the main known pathological mechanisms at the basis of AD and to describe the possible biomarkers to be used for an early diagnosis of the disease.