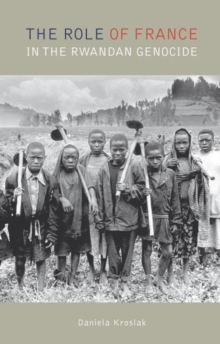 The Role of France in the Rwandan Genocide Paperback / softback

After the Holocaust, the victorious Allies pledged 'Never Again' to genocide.

This promise, enshrined in the UN Convention on Genocide, stipulates a responsibility to try and prevent genocide or mitigate the suffering of its victims in the future.

The book analyses what this responsibility might entail by asking the following questions: To what extent can external actors, such as the French Government, be held responsible for not preventing or not suppressing genocide, and how can this responsibility be evaluated?

Why almost fifty years after the Genocide Convention did outsiders remain passive whilst Hutu extremists perpetrated genocide against the Tutsi minority and Hutu moderates in Rwanda?

How can French government responsibility be evaluated in the light of its actions/inaction?

What was France's role? The book explores the historical and contextual background of the Rwandan genocide and French involvement in Africa, and then elaborates three key themes: the extent of French government's information about the preparation of the genocide and its awareness of the scale of the potential disaster; the degree of involvement by the French government during and before the genocide; and the level of French diplomatic and military capability to halt or suppress both the preparations for genocide and the genocide itself. "The Role of France in the Rwandan Genocide" concludes by drawing the reader's attention to the fact that the 'Never Again' pledge does not only incorporate a duty in terms of prevention and suppression of genocide.

It also encompasses responsible policies towards a post-genocidal regime which might use the guilt of previously passive external actors to defend its own atrocities, such as Rwanda's campaign in the Democratic Republic of Congo.