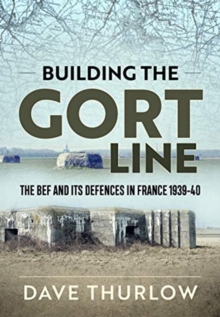 Building the Gort Line : The Bef and its Defences in France 1939-40 Paperback / softback

The main theme of this book is the British Expeditionary Force (BEF) and the defences it constructed in France during September 1939-May 1940.

Although there have been many books written about the BEF, virtually all deal with the campaign in France and Flanders that cumulated in the evacuation from Dunkirk.

No detailed account has ever been published on the defences the BEF built in the Secteur Defensive de Lille - the front allocated to it by the French - along the Franco-Belgium border.

This account of the Gort Line aims to fill this gap in our knowledge of Second War defences. The book's objective is to broadly answer four questions: Firstly, what events led to the Gort Line being built?

Secondly, what defences were built and what were the ideas behind them - did they reflect a flawed 'Maginot' mentality?

The third question is what exactly did the BEF do in France during the Sitzkrieg? And fourthly, how relevant was the Gort Line to what was done in Britain in respect of the anti-invasion defences immediately after Dunkirk?

The book starts by looking at the historical context, with a review of how the inter-war years shaped the grand strategy of Britain, France and Germany.

In doing so, it can be understood why the BEF dug in along the Franco-Belgian border alongside their French allies.

Having set the historical context, the book will describe how the Gort Line was set out with reference to British principles governing the employment of all arms in positional warfare.

Chapters will deal with the construction of the Gort Line and its defences: the pillboxes, field works, obstacles and demolitions.

A chapter will describe the activities of the BEF - including training - and a glimpse at what life was like for the ordinary soldier while 'holding' the Gort Line. Allied higher strategy, determined by the French as the senior partner, is outlined in a chapter and this gives the context as to why the BEF did not fight on the Gort Line.

Instead, French strategy committed it to rush into Belgium alongside the French Army and the Gort Line was in effect relegated to a reserve position.

The Sitzkrieg ended violently with the German Blitzkrieg and the events of those three weeks are described, when the Gort Line was actually occupied - albeit briefly - by the BEF and French.

Finally, the book will look at Britain's anti-invasion defences immediately after Dunkirk and the influence the Gort Line had on these.