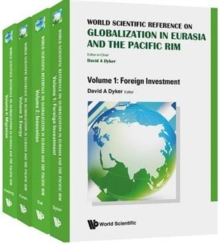 With half the world's population, it is one of the most dynamic regions of the globe in terms of population movement, providing a key focus of foreign investment, both inwards and outwards, with a high degree of technological dynamism.

The region plays a central role in the industrial supply networks of the globe.In four volumes, focusing on, respectively, foreign investment, innovation, energy and migration, the set focuses on each of the main elements in the production system in turn - capital, innovation, raw materials and labour.

Volume 1 studies patterns of interchange of financial and direct investment within the region, focusing on governance, the development of supply chains, and technology transfer.

In Volume 2, the technology theme becomes dominant, with a special focus on digital technology.

It includes technical issues like mobile communications standardisation, developmental dimensions, including the role of clusters and science parks, and political economy issues like the rise of techno-nationalism.

Volume 3 turns to energy issues - not just issues of supply and demand, but also key problems of climate change, security and sustainability across the Eurasian and Asian landmass.

Among the key issues discussed are the migration from country to town in China, the 'greying' of countries like Japan, the effect of war on migration, marriage migration, human trafficking and the depopulation of the Russian Far East.The set is a must-have for anyone keen to understand the region whose manufacturing core can be described, without exaggeration, as the 'workshop of the world' of the twenty-first century.