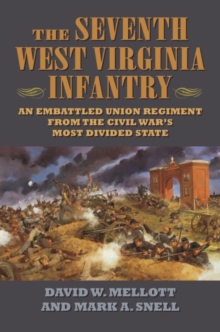 by David A. Mellott, Mark A. Snell

Though calling itself "The Bloody Seventh" after only a few minor skirmishes, the Seventh West Virginia Infantry earned its nickname many times over during the course of the Civil War.

Fighting in more battles and suffering more losses than any other West Virginia regiment, the unit was the most embattled Union regiment in the most divided state in the war.

Its story, as it unfolds in this book, is a key chapter in the history of West Virginia, the only state created as a direct result of the Civil War.

It is also the story of the citizen soldiers, most of them from Appalachia, caught up in the bloodiest conflict in American history. The Seventh West Virginia fought in the major campaigns in the eastern theater, from Winchester, Antietam, and Fredericksburg to Chancellorsville, Gettysburg, and Petersburg.

It also examines the circumstances surrounding events, mundane and momentous alike such as the soldiers' views on the Emancipation Proclamation, West Virginia Statehood, and Lincoln's re-election.

The product of decades of research, the book uses statistical analysis to profile the Seventh's soldiers from a socio-economic, military, medical, and personal point of view; even as its authors consult dozens of primary sources, including soldiers' living descendants, to put a human face on these "sons of the mountains." The result is a multilayered view, unique in its scope and depth, of a singular Union regiment on and off the Civil War battlefield-its beginnings, its role in the war, and its place in history and memory.