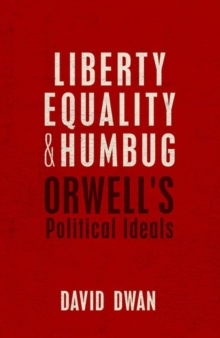 George Orwell is watching you and you're watching him.

Britain pays its respects in the form of the Orwell Prize, the Orwell Lecture, and, more recently, Orwell Day.

A statue of Orwell now stands outside Broadcasting House in London and he continues to tower over broadsheet journalism.

His ghost is repeatedly summoned in the houses of Parliament and in schools across Britain.

In Europe and the US, citizens confront the perennial question: "What would Orwell say?" Orwell is part of the political vocabulary of our times, yet partly due to this popularity, what he stands for remains opaque.

His writing confirms deep and widely shared intuitions about political justice, but much of its enduring fascination derives from the fact that these intuitions don't quite add up.

David Dwan accounts for these inconsistencies by exploring the broader moral conflict at the centre of Orwell's work and the troubled idealism it yields.

Examining the whole sweep of Orwell'swritings, this book shows how literature can be a rich source of political wisdom.