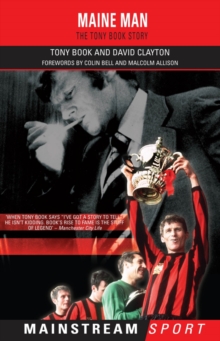 Tony Book's footballing career is something of a modern-day fairy tale, and Maine Man is the definitive account of his intriguing journey. Born the son of an Army officer in 1934, he spent his childhood in India playing barefoot football in the streets with the local kids.

From there he returned as a young man to Bath, where he played for a local miners' side before following his father into the Army.

After a short period in service, Book became a bricklayer and played for various local sides before joining Bath City.

It was there that he first met manager Malcolm Allison - a figure who was to play an influential part in Book's career. In 1964, Book was transferred to Plymouth Argyle, where he played for two years before former boss Allison, by then co-manager at Manchester City, convinced his partner Joe Mercer to take a chance on the now veteran full-back.

Book went on to captain the team throughout their most successful period, during which they won every domestic trophy, as well as the European Cup-Winners' Cup.

Book was the recipient of the first-ever Manchester City Supporters Club Player of the Year award in 1967 and was voted joint Football Writers' Association Footballer of the Year in 1969. At the end of 1973, Book hung up his boots as a player and became assistant to the new City manager, Ron Saunders.

Within six months, Tony was elevated to manager and the Blues won their last major trophy to date - the League Cup in 1976 - and finished one point behind Liverpool in the championship of 1976-77.

His exemplary period as boss ended when, ironically, his old mentor Malcolm Allison returned to the club in 1979, eventually costing Book his job. Spells at Cardiff and Sunderland followed for the man they still call 'Skip' at Manchester City, and Book remains one of the most respected players and managers in the club's history.