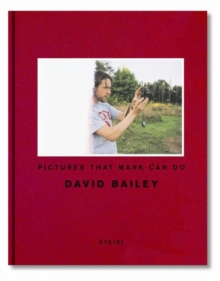 David Bailey : Pictures that Mark Can Do Hardback

"Mark is good natured. He finds the best in most things. To explain more would too much. These are just pictures that Mark can do." David Bailey David Bailey may be a master of the medium but he also readily accepts that photography is technologically driven.

The snapshot is a part of our visual culture many photographs have been taken millions of times, with just slight variations, as the identity of the people in a family portrait.

Bailey also takes such snaps, images imbued with a sense of ease and freedom yet which in his hands carry much greater weight and significance.

He believes these photographs appear so easy that even Mark, his assistant, could have made them - and so this quip became the title of this, his latest book.

David Bailey, born in London in 1938, is one of the most successful photographers his generation.

His numerous books include Trouble and Strife, Nudes, If We Shadows, The Lady Is a Tramp and David Bailey's Rock 'n' Roll Heroes.