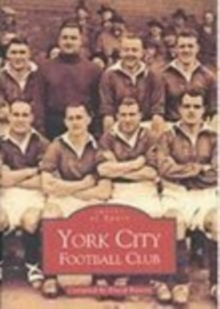 Although they have spent nearly all their time in the lower divisions of the Football League, York City Football Club can boast a number of fine achievements and have contributed a great deal to the sporting history of the ancient city that is their home.

This book illustrates City's past with a superb collection of action photographs, team shots, player portraits, programme covers and other items of memorabilia. Each decade has provided heroes and drama. In the 1930s the club reached the FA Cup sixth round and Bootham Crescent housed its biggest ever attendance of 28,123.

Wartime crowds were entertained by a number of star guest players and in the mid-fifties City came so near to being the first-ever Division Three side to reach Wembley, losing to Newcastle United in an FA Cup semi-final replay.

The 1960s saw an exciting promotion campaign and in 1974 City climbed to the highest point in their history when they reached the old Second Division and rubbed shoulders with the likes of Manchester United, Chelsea, Aston Villa and Sutherland.

After a few less fruitful seasons, York won the Division Four title in some style in 1983/84 (becoming the first club to reach 100 points in a season) and they achieved another promotion in 1992/93 after a tense afternoon at Wembley.

In recent years they have pulled off some remarkable giant-killing feats, including Arsenal, Manchester United and Everton among their victims in cup competitions. With detailed captions from club historian David Batters, this is an essential read for anyone with an interest in York City and will delight both young and old supporters of the team. 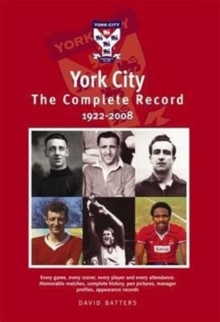