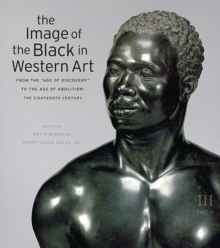 The Image of the Black in Western Art, Volume III: From the "Age of Discovery" to the Age of Abolition, Part 3: The Eighteenth Century Hardback

In the 1960s, art patron Dominique de Menil founded an image archive showing the ways that people of African descent have been represented in Western art.

A half-century later, Harvard University Press and the Du Bois Institute are proud to publish a complete set of ten sumptuous books, including new editions of the original volumes and two additional ones. Europe and the World Beyond focuses geographically on peoples of South America and the Mediterranean as well as Africa-but conceptually it emphasizes the many ways that visual constructions of blacks mediated between Europe and a faraway African continent that was impinging ever more closely on daily life, especially in cities and ports engaged in slave trade. The Eighteenth Century features a particularly rich collection of images of Africans representing slavery's apogee and the beginnings of abolition.

Old visual tropes of a master with adoring black slave gave way to depictions of Africans as victims and individuals, while at the same time the intellectual foundations of scientific racism were established.