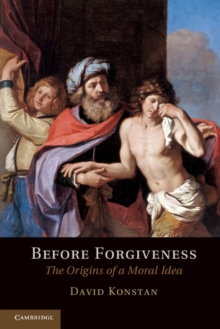 Before Forgiveness : The Origins of a Moral Idea Paperback / softback

In this book, David Konstan argues that the modern concept of interpersonal forgiveness, in the full sense of the term, did not exist in ancient Greece and Rome.

Even more startlingly, it is not fully present in the Hebrew Bible, nor in the New Testament or in the early Jewish and Christian commentaries on the Holy Scriptures.

It would still be centuries - many centuries - before the idea of interpersonal forgiveness, with its accompanying ideas of apology, remorse, and a change of heart on the part of the wrongdoer, would emerge.

For all its vast importance today in religion, law, politics and psychotherapy, interpersonal forgiveness is a creation of the eighteenth and nineteenth centuries, when the Christian concept of divine forgiveness was fully secularized.

Forgiveness was God's province and it took a revolution in thought to bring it to earth and make it a human trait.