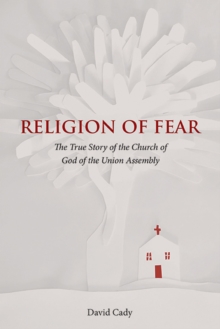 Religion of Fear : The True Story of the Church of God Union Assembly Hardback

Based on extensive interviews with mostly former cult members, this book chronicles the history of the Church of God of Union Assembly from its beginning around World War I up to recent times.

Founded by a charismatic, unlettered leader, C. T. Pratt, who forcefully broke away from the Holiness COG organization, the church eventually found its home base in Dalton, Georgia.

It grew steadily at first and then more rapidly as the great Depression ravaged workers in the mostly rural area of north Georgia.

The group set up communal living practices and spread branches of the church across the country, recruiting among the most displaced with a message of social uplift and anti-capitalism, even as its religious practices became increasingly authoritarian and exploitative.

If C. T. Pratt exhibited some characteristics of a violent cult leader, his son, who took over the church as his father suffered from ill-health, took these tendencies to a new level that eventually caught the attention of secular authorities.

His son, in turn, was even worse--and placed the church on the path to financial ruin.