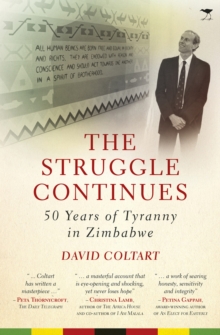 The struggle continues : 50 Years of tyranny in Zimbabwe Paperback / softback

David Coltart is one of the most prominent political and human rights figures in Zimbabwe.

Born and schooled in Zimbabwe, he trained in law at the University of Cape Town, and has served as principal defence counsel for a wide range of Zimbabwean politicians who have fallen afoul of Robert Mugabe's regime.

In 2000, he was elected to Parliament and, following the creation of a 'coalition' government in September 2008, he was appointed Minister of education, sport, arts and culture, a position he held until August 2013.

Over the years, Coltart has been threatened, detained, spuriously prosecuted and has survived several direct attempts on his life.

As a young man, Coltart was urged by Robert Mugabe to return to Zimbabwe from South Africa, but he would become one of Mugabe's favourite targets of vilification, branded a traitor to the state and worthy of remaining in the country only as a resident of one of its prisons. For three decades, Coltart has kept detailed notes and records of all his work, including a meticulous diary of cabinet dealings, the source material for much of his book.

It is set to be the most authoritative book to date of the last sixty years of Zimbabwe's history: From the obstinate racism of Ian Smith that provoked Rhodesia's unilateral declaration of independence from Britain in 1965, to the civil war of the 1970s, the Gukurahundi genocide of the 1980s, Robert Mugabe's war on white landowners, and the struggles waged by the MDC.

A key theme throughout the book is the role of political extremists who have consistently subverted Zimbabwe's chances of realising its true potential.