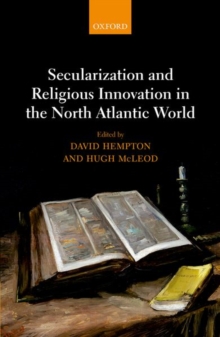 Secularization and Religious Innovation in the North Atlantic World Hardback

In the early twenty-first century it had become a cliche that there was a 'God Gap' between a more religious United States and a more secular Europe.

The apparent religious differences between the United States and western Europe continue to be a focus of intense and sometimes bitter debate between three of the main schools in the sociology of religion.

According to the influential 'Secularization Thesis', secularization has been an integral part of theprocesses of modernisation in the Western world since around 1800.

For proponents of this thesis, the United States appears as an anomaly and they accordingly give considerable attention to explaining why it is different.

For other sociologists, however, the apparently high level of religiosity in the USAprovides a major argument in their attempts to refute the Thesis. Secularization and Religious Innovation in the Atlantic World provides a systematic comparison between the religious histories of the United States and western European countries from the eighteenth to the late twentieth century, noting parallels as well as divergences, examining their causes and especially highlighting change over time.

This is achieved by a series of themes which seem especially relevant to this agenda, and in each case the theme is considered by two scholars.

Thevolume examines whether American Christians have been more innovative, and if so how far this explains the apparent 'God Gap'.

It goes beyond the simple American/European binary to ask what is 'American' or 'European' in the Christianity of the nineteenth and twentieth centuries, and in what ways national orregional differences outweigh these commonalities.