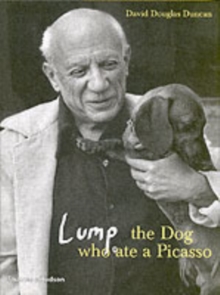 Lump: The Dog who ate a Picasso Hardback

One spring morning in 1957, veteran photojournalist David Douglas Duncan paid a visit to his friend and frequent photographic subject Pablo Picasso, at the artist's home near Cannes.

As a co-pilot alongside Duncan in his Mercedes Gullwing 300 SL was the photographer's pet dachsund, Lump.

Photographer and dog were close companions, but Duncan's nomadic lifestyle and his other dog - a giant jealous Afghan hound who had tormented Lump - made their life in Rome difficult.

When they arrived at Picasso's Villa La Californie that historic day, Lump decided that he had found paradise on earth, and that he would move in with Picasso, whether the artist welcomed him or not. This is the background for a totally original book that offers an uncommonly sensitive portrait of Picasso.

Lump was immortalized in a Picasso portrait painted on a plate the day they met, but that was just the beginning.

In a suite of forty-five paintings reinterpreting Velasquez's masterpiece `Las Meninas', Picasso replaced the impassive hound in the foreground with jaunty renderings of Lump. Today, as a gift from the artist to his hometown as a youth, all of those historic canvases are now the centerpiece exhibition in the Picasso Museum of Barcelona.

Fourteen of the paintings are reproduced here in full colour, juxtaposed with Duncan's dramatic and intimate black-and-white photographs of Picasso and Lump, bringing full circle the odyssey of a lucky dachshund who found his way to becoming a furry, super-stretched icon of modern art.