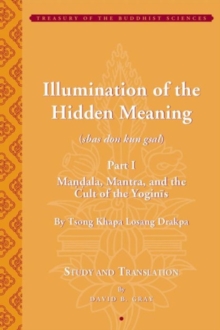 Tsong Khapa's Illumination of the Hidden Meaning and the Cult of the Yognis, a Study and Annotated Translation of Chapters 1-24 of Kun Sel Hardback

This is the first in a two-volume annotated translation of Tsong Khapa's Illumination of the Hidden Meaning (sbas don kun sel).

A magnificent and massive commentary on the Cakrasamvara Tantra, this is first English translation of a work that marks a milestone in the Tibetan assimilation of the Indian Buddhist tantras. This first volume, which includes Tsong Khapa's detailed introduction to chapters 1 to 24 of the 51 chapter root tantra, covers the history of the tradition, its interpretation, and a range of topics including the construction of the mandala, the consecration therein, and the decoding of mantras and their ritual applications, as well as extensive details concerning the clans of the yoginis and the procedures to win their favor.

David B. Gray situates the work in context and explores in depth the sources used in composing this commentary.

He also provides detailed notes, a trilingual English-Tibetan-Sanskrit glossary, and an appendix that includes a translation and a critical edition of the Laghusamvaratantrapatalabhisandhi, a synopsis of the Cakrasamvara Tantra composed by Sumatikirti, which is quoted in its entirety by Tsong Khapa in his commentary. This work will be followed by a second volume of the annotated translation subtitled Yogic Vows, Conduct, and Ritual Praxis (An Annotated Translation of Chapters 25-51) and a third volume that will include a critical edition of the entire Tibetan text. Published by American Institute of Buddhist Studies (AIBS)