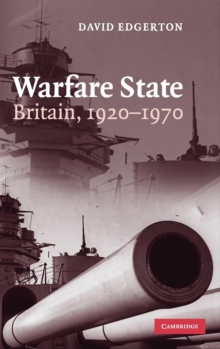 A challenge to the central theme of the existing histories of twentieth-century Britain, that the British state was a welfare state, this book argues that it was also a warfare state, which supported a powerful armaments industry.

This insight implies major revisions to our understanding of twentieth-century British history, from appeasement, to wartime industrial and economic policy, and the place of science and technology in government.

David Edgerton also shows how British intellectuals came to think of the state in terms of welfare and decline, and includes a devastating analysis of C.

P. Snow's two cultures. This groundbreaking book offers a new, post-welfarist and post-declinist, account of Britain, and an original analysis of the relations of science, technology, industry and the military.

It will be essential reading for those working on the history and historiography of twentieth-century Britain, the historical sociology of war and the history of science and technology.