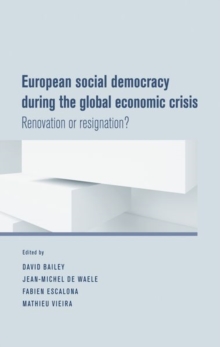 This book makes an important contribution to the existing literature on European social democracy in the wake of the 2008 financial crash and ensuing recession.

It assesses how social democratic parties have responded, at the national as well as at the European Union level.

A wide range of leading political scientists provide the reader with an in-depth understanding of the prospects for social democracy in the midst of an unprecedented crisis for neoliberalism.

The book benefits from an analysis of social democratic parties' experiences in 6 different countries - the UK, Sweden, Germany, France, Spain and Greece - along with a number of chapters on the fate of social democracy in the institutions of the EU. -- .