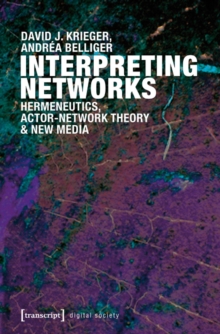 After post-modern critique has deconstructed, decentred, and displaced order and identity on all levels, we are faced with the Humpty Dumpty question of how to put the pieces back together again.

This book brings together the seldom associated discourses of hermeneutics, actor-network theory, and new media in order to formulate a theory of a global network society.

Hermeneutics re-opens the question of unity in a fragmented world.

Actor-network theory reinterprets the construction of meaning as networking.

New media studies show how networking is done. Networks arise, are maintained, and are transformed by communicative actions that are governed by network norms that make up a social operating system.

The social operating system offers an alternative to the imperatives of algorithmic logic, functionality, and systemic closure that dominate present day solutions to problems of over-complexity in all areas.

The world of meaning constructed by the social operating system is a mixed reality in which filters and layers replace the physical restraints of space and time as parameters of knowing and acting. Society and nature, humans and non-humans come together in a socio-sphere consisting of hybrid, heterogeneous actor-networks.

This book proposes reinterpreting hermeneutics as networking and networking as guided by a social operating system whose norms are based on new media.

There emerges a theory for a global network society described by different concepts than those typical of Western modernity.