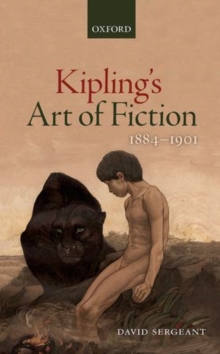 Kipling's Art of Fiction 1884-1901 re-establishes its subject as a major artist.

Through extended close readings of individual works, and unprecedentedly detailed attention to changes in location and readership, it distinguishes between two kinds of Kipling fiction.

The first is coercive and concerned with the authoritarian control of meaning; the second relates less directly to its immediate historical surroundings and is more aesthetically complex. Misunderstandings have often resulted from confusing the two kinds of work.

Distinguishing between them allows for a newly coherent account of Kipling's career, both explaining his artistic achievement and making clearer his identity as a political writer.

Changes in Kipling's narrative practice are tracked as hemoves from India to Britain and the US, and engages with a succession of new audiences and political contexts; detailed readings are provided of such key texts as Plain Tales from the Hills, The Jungle Books and Kim.

As well as revealing the precise nature of Kipling's artistry, this book shows how properties of narrative which have been generally underrated - such as embodiment and externality - can be used to make sophisticated fictions, and by linking these toRobert Louis Stevenson's discussion of the romance, suggests new ways in which such work might be approached.