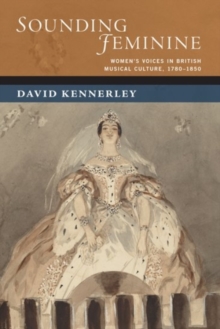 Part of the NEW CULTURAL HISTORY OF MUSIC SERIES series

Between 1780 and 1850, the growing prominence of female singers in Britain's professional and amateur spheres opened a fraught discourse about women's engagement with musical culture.

Protestant evangelical gender ideology framed the powerful, well-trained, and expressive female voice as a sign of inner moral corruption, while more restrained and delicate vocal styles were seen as indicative of the performer's virtuous femininity.

Yet far from everyone was of thispersuasion, and those from alternative class and religious milieux responded in more affirmative ways to the sound of professional female voices.

The meanings listeners ascribed to women's voices reflect crucial developments in the musical world of the period, such as the popularity of particulargenres with audiences of certain social backgrounds, and the reasons underpinning the development of prevalent types of nineteenth-century professional female vocality. Sounding Feminine traces the development of attitudes towards the female voice that have decisively shaped modern British society and culture.

Arguing for the importance of the aural dimension of the past, author David Kennerley draws from a variety of fields-including sound studies, sensory histories, and gender theory-to examine how audiences heard different kinds of femininities in the voices of British female singers.

Sounding Feminine explores the intense divisions overthe "correct" use of the female voice, and the intricate links between gender, nationality, class, and religion in ascribing status, purpose, and morality to female singing.

Through this lens, Kennerley also explores the formation of British middle-class identities and the cultural impact of the evangelicalrevival-deepening our understanding of this period of transformational change in British culture.