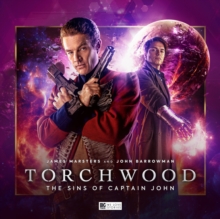 NOTE: Torchwood contains adult material and is not suitable for younger listeners. 1. The Restored Captain John is in Restoration England looking for some gauntlets.

There's intrigue in the Tower of London, the dead are walking the streets, and the severed head of Oliver Cromwell has a terrible warning. 2. Escape from Nebazz Captain John is in a wooden space prison that's under attack by a strange and terrible life form.

Also the catering is truly dreadful and Dr Magpie's latest discovery may have got a little out of hand. 3. Peach Blossom Heights Captains John and Jack find themselves stranded on a world that may be actual paradise - the weather is pleasant, the people are friendly, and the giant stuffed animals only come out at night.

There's only one thing the world is missing. No-one has every explained to any of the population about the birds and the bees.

Which is unfortunate. 4. Darker Purposes Captain John arrives at the funeral of one of the galaxy's richest men.

He died without making a will, and his heirs have some very creative ideas about how this can be put to rights involving murder, necromancy and seduction.