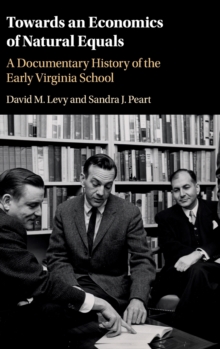 Towards an Economics of Natural Equals : A Documentary History of the Early Virginia School Hardback

Democracy is understood as government by discussion, not majority rule.

The claim of efficiency unsupported by consent, as common in orthodox economics, appeals to social hierarchy.

Politics becomes an act of exchange among equals where the economist is only entitled to offer advice to citizens, not to dictators.

The foundation of natural equality and consent explains the common themes of James Buchanan and John Rawls as well as Ronald Coase and the Fabian socialists.

What orthodox economics treats as efficient racial discrimination violates the fair chance entitlement to which people consent in a market economy.

The importance of replication stressed by Gordon Tullock, developing themes from Karl Popper, is another expression of natural equality since the foresight of replication induces care into research.

The publication of previously unpublished correspondence and documentation allows the reader to judge recent controversy.