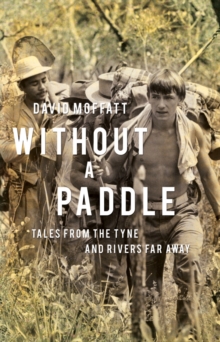 Without a Paddle : Tales from the Tyne and rivers far away Paperback / softback

Born and bred in the North East of England, David Moffatt had no intention of disturbing his deep roots in the banks of the Tyne until his University tutor asked him to go to Mato Grosso in Brazil.

With a fraught love life, and his football team heading for relegation, suddenly a year in the jungle sounded like a good idea.

His life is changed forever... Against a backdrop of growing up in postwar Tyneside, Without a Paddle describes David's travels in a series of tales and delightful vignettes. Amusing, sometimes hilarious, occasionally sad, we meet his drunken bush guide that he has to disarm, his incompetent camp cook who nearly poisons his boss, an odd assortment of expeditionaries from the elderly entomologist that David has to save from the wasps to a sexchange capybara, and the young female zoologist who...well, it's all in the book.

With a major bid submission hours away, David gets locked stark naked in his bathroom in Cairo, exiting via the window to a busy street seems his only option.

At the height of the 'red terror' in post-revolutionary Ethiopia, his room is searched while he sleeps - and was the hammering on his door in a seedy hotel in Ogaden the beginning of a kidnap?

New Year's Eve in Rio finds him in a club to which he doesn't belong and discover what happens to the Gambian beauty queen in Banjul market.

After growing up on Tyneside with a teddy bear that travelled to South Africa, playing and watching football and more football, singing with The Invaders and being suspended from school, none of this had equipped David with the paddle he needed to steer him through his travels.

Without a Paddle is a light-hearted memoir that will appeal to those with an interest in foreign travel, or who simply enjoy a good laugh.