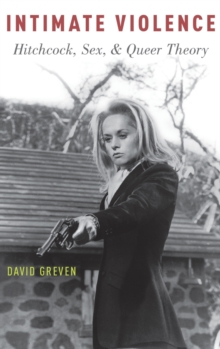 Intimate Violence explores the consistent cold war in Hitchcock's films between his heterosexual heroines and his queer characters, usually though not always male.

Decentering the authority of the male hero, Hitchcock's films allow his female and queer characters to vie for narrative power, often in conflict with one another.

These conflicts eerily echo the tense standoff between feminism and queer theory.

From a reparative psychoanalytic perspective, DavidGreven merges queer and feminist approaches to Hitchcock.

Using the theories of Melanie Klein, Greven argues that Hitchcock's work thematizes a constant battle between desires to injure and to repair the loved object.

Greven develops a theory of sexual hegemony. The feminine versus the queer conflict, as hecalls it, in Hitchcock films illuminates the shared but rivalrous struggles for autonomy and visibility on the part of female and queer subjects.

The heroine is vulnerable to misogyny, but she often gains an access to agency that the queer subject longs for, mistaking her partial autonomy for social power.

Hitchcock's queer personae, however, wield a seductive power over his heterosexual subjects, having access to illusion and masquerade that the knowledge-seeking heroine must destroy.

Freud'stheory of paranoia, understood as a tool for the dissection of cultural homophobia, illuminates the feminine versus the queer conflict, the female subject position, and the consistent forms of homoerotic antagonism in the Hitchcock film.

Through close readings of such key Hitchcock works as North byNorthwest, Psycho, Strangers on a Train, Spellbound, Rope, Marnie, and The Birds, Greven explores the ongoing conflicts between the heroine and queer subjects and the simultaneous allure and horror of same-sex relationships in the director's films.